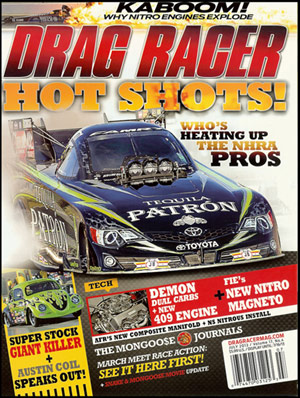 SPUD MILLER: the Man and His Mags 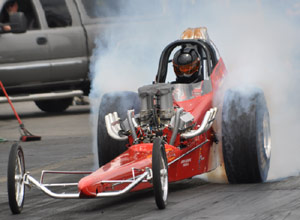 Spud Miller's "One Hot Chili Pepper" dragster is the inspiration for many of FIE's products and services.

This story should sound familiar. Boy shows an early aptitude for machinery, and goes out into the world on his own at an early age, tinkering with any motor his friends or acquaintances will let him touch. He turns drag racer in his teens, starts tuning for his friends for beer or parts, and then later for money. He eventually sees a need for some whizzy part that doesn't exist yet, or dreams of finding some elusive bit of engineering info that he thinks will get him down the 1320 at five-hundredths quicker. When he can't find just the right part or tool, he has to go about making it himself...and he ends up in business doing it for everyone else too. 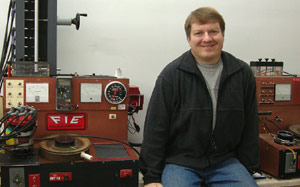 Spud Miller is an automotive mad scientist and the man behind FIE.

This story is told countless times in our rodding and racing history. In this example though, it didn't start sixty years ago. Substitute 2002 in place of 1960 for the start of the business and part of it is rebirth.

Spud Miller grew up attending Stock Car races at the local 1/4 mile dirt track. He served as a pit crew helper at an age where most kids were focused on Saturday Morning Cartoons instead of wrenching on Saturday Night smashboxes doing battle on a dirt oval. His first business venture was "Spud's Specialties"...changing oil and performing ignition tuneups for family friends at the age of 9.

With summer farm jobs funding his efforts, he began to build his first engine at the ripe old age of twelve. A Chevy man from day one, Spud began by building a 350 for the '57 Chevy given to him by his Dad. By age 15, the motor was running and the white shoebox was terrorizing the back country roads of Monroe, Oregon. Equipped with dual quads, a tunnel ram, fenderwell headers, a "nose-up" attitude, and no grille - it was a throwback way before retro-gassers had been thought of as a street style, and Spud was already waxing nostalgic about what it must have been like back in "those good-'ol days." A friend suggested that the Chevy would be right at home on the strip and introduced Spud to drag racing. In the early Eighties, he took the '57 to Woodburn Dragstrip, and spent countless hours and every nickel he could scrounge racing the high-school bracket class. 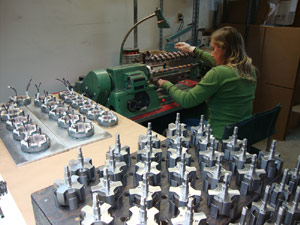 Attending school to learn the machinists' trade meant giving up racing. Stints as a tool and die maker, designer, CNC programmer/machinist and a long hitch with Hewlett Packard as a software engineer further interrupted all those racing dreams. Then in 2000, twenty years of pent-up drag lust boiled over into the purchase of a very clapped-out front engine dragster shipped to Oregon from New York. Spud spent the next year rebuilding it into "One Hot Chili Pepper," an alcohol-injected bracket fighter. Little did he know this would start the ball rolling on what would later become Fuel Injection Enterprises (FIE) and eventually taking over the famed Super-Mag and Sprintmag product line from Mallory Ignition.

Bracket racing an injected front-engined digger seemed like an uphill battle at first, but Spud had even bigger plans. The goal was sub-seven second runs with a nitro injected, cast iron, 23 degree, low budget, naturally aspirated mouse motor. But info out there on how to use the "nasty-juice" is more legend in the mist than cold hard repeatable facts. So, when you have the ability to design and make your own parts, and want to learn the tiniest detail about how mechanical fuel injection really works, you do the only logical thing imaginable. You build your own computer-controlled flow bench capable of testing a full fuel system and measuring everything about it.

A wee-bit of careful calculating is required to figure out if that perfectly measured flow will do any good at all. Inputs such as compression ratio, runner length, valve overlap, etc. contribute to accuracy when calculating the amount of fuel that will actually burn and not just pass harmlessly out of the exhaust. Spud's background prepared him well for such tasks. 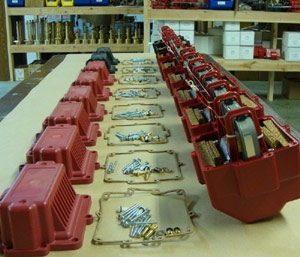 Another batch of the Super-Mag's big transformers are ready for assembly.

Once he knew exactly what the injection would do, the real fun started. Spud put his toe in the water with 30% nitro, and then 50%. About then, others started bringing their hardware to Spud's cave for massaging and tweaking. Things snowballed from there and before he knew it, he had two full-time jobs fighting for his attention. Holding steady at 75% nitro for a few seasons allowed him to be competitive in a local nostalgia class while working out the power-glide/torque converter combination. "Of course the extra power stressed everything." Spud said. "Our approach was to deal with one problem at a time and slowly upgrade things as we went along, keeping the eventual goal in mind." Finally, in 2011 everything was in order and ready for full boogie. Spud & Crew dumped 98% in the tank, doubled the fuel volume and shot from 7.40's @ 178 to 6.90's @ 199. "We only had a few issues. The torque converter was too small and we drove right through it...which unloaded the motor and put out all 8 holes at half track until we took care of that. Also, our starting line setup needed to change." To help cure that problem, Spud dreamed up a barrel valve design that greatly enhanced the leave-from-an-idle situation that nitro demands. While he was at it, he added everything but the kitchen sink; "Besides a built-in idle needle to handle the high idle fuel pressure, it has a start-up circuit to allow firing the motor on methanol prior to changing over to nitro before a pass. It also has an idle nozzle circuit that will cut out completely and allow 100% down nozzles on a run - really important for a naturally aspirated setup with poor heads."

Finally, the last issues were traction and tire shake. "We'd either blow the tires off or rattle my brains out and require an early shift on every run. To me, that indicated that gears were probably the answer to the shake. We went to 2.91 gears and it was completely cured. I thought it'd be a slug but when we could hook up we had our best 60' times ever." Not satisfied to simply take his chances at the starting line with traction, Spud decided timing control was the answer. Running a points-mag setup, the answer had to be mechanical so Spud & Co. designed a piece that has become a very popular product for FIE. "To really burn the fuel we needed to be at 60+ degrees and that made for impossible starting and marginal traction at the line. So, we start up and leave the line at 45 degrees and roll in another 17 degrees smoothly over the first second. We can handle any race track now. End of problem."

Spud always finds a solution, applying creative thinking coupled with great engineering design in the products and services offered by Fuel Injection Enterprises. "With small Chevys, the siamese exhaust ports in the center can cause frequent head gasket problems for people. I designed a CO2 cooling system and aim the CO2 directly behind the center exhaust ports in the coolant passages. We run the motor with no coolant but a single small CO2 bottle keeps the heads cool enough during a run that the o-ringed copper gaskets live season after season. We turned this around as a product and others have had excellent results as well." 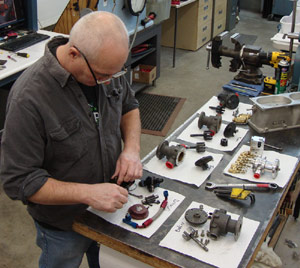 FIE offers a full line of parts, full fuel system flow testing, pump and tune up service. Customers routinely lay down their fastest runs ever, once their systems come back to them flowed, tested, and tuned by Spud and his crew.

FIE was off and running on fuel systems, but getting it lit perfectly became an obsession for Spud. He went back to the mad scientist's workbench and built a magneto stress tester that would put any decent Frankenstein movie lab to shame, complete with full instrumentation, flashing strobe lights and miniature lightning bolts. He could stress test and measure everything about any mag to 11,500 RPM.

After FIE had tested many marginal mags, Spud began applying that engineering improvement drive to solve the problems that needed fixing. The first step was to retro-fit what he calls Severe-Duty Contacts to the big amp Super-Mags. These can be sprung to handle over 10,000 RPM, have no problems with heat and stay aligned perfectly.

Looking to exit the magneto business, Mallory Ignition approached Spud in 2011. FIE had become their top buying mag shop, making them a natural choice to continue the Super-Mag/Sprintmag legacy. "They wanted to make sure they sold it to someone who was going to keep making the parts and pieces to supply customers for years to come." Mags serviced at FIE first get a pre-test to see where things are as received. After complete tear down, cleaning and reassembly with new hardware, the mag is loaded hard, run-in and post-tested. Individual cylinder timing is checked and adjusted and the customer receives a report showing before and after performance.

With the rise of nostalgia racing, particularly Nitro Funny Car and its rules restricting electronics, Spud started thinking about creating a more powerful and reliable points mag than the field was currently running. "Mallory never took the points version of the Super-Mag beyond 8 amps because the points were marginal beyond that and reliability suffered. Once we licked the points issue with the Severe-Duty contacts, we decided to bump it up a notch and see how it would affect the nitro motors. We fiddled with a new stator/winding assembly and bigger magnets to get over 10 amps at an idle. The result was something 30% more powerful with unbelievable reliability."

"Since Mallory already burned through all the roman numerals, I decided to call this new 10 amp version the Super-Mag+" says Miller. "This mag has the Nostalgia Funny Cars rocking. Tuners can now richen the idle WAY up and enjoy better early incrementals than ever. No dropped cylinders at either end of the track results in better, more predictable performance as well as less engine damage."

Spud and One Hot Chili Pepper finally broke into the 6 second barrier in 2011 with a best ET to date of 6.91. "While we could put more fuel in it and go even quicker, eventually we'd blow it all up and that isn't my goal. We are abusing some very modest parts. A 6.80-something best with consistent 6.90's are what I'm after." he says.

Last fall FIE moved to a new larger facility and is now up to full speed servicing fuel systems, pumps and mags of all makes. Manufacturing new Super-Mags, Sprintmags, lower drives, transformer coils, and other accessories keeps the crew hopping as well. If you race anything with mechanical injection or a magneto, they have what you need.

It's a modern day retelling of an old story. From boy racer in a shoebox Chevy, to Nitro slingshot pilot, to racing parts manufacturer, Spud Miller and FIE are two more names you need to know in our history of racing and hot rodding.